International Women’s Day: How to Better Empower the Women in Our Lives

International Women’s Day: How to Better Empower the Women in Our Lives

Before I go any further, let me make one thing clear–yes, I know. Not everyone’s a feminist or an activist. Not everyone reading this might personally feel like they’ve been affected by gender differences or inequality. Why does this all matter for you? I’ve honestly asked myself this question before on more than one occasion. Today–March 8–is International Women’s Day around the world. Hurrah!! It’s also Women’s History Month, which is all about shining a light on the strides women have taken for equality–the trailblazers and the courageous voices, the struggles and the triumphs women have encountered throughout history, all in an effort to be heard and recognized as equals.

Before I go any further, let me make one thing clear–yes, I know. Not everyone’s a feminist or an activist. Not everyone reading this might personally feel like they’ve been affected by gender differences or inequality. Why does this all matter for you? I’ve honestly asked myself this question before on more than one occasion. Growing up, I’ve been fortunate in that I haven’t had that many horrifying experiences related to my gender. I’ve dealt with the occasional cat-call, I’ve had older men say inappropriate things in a weak attempt at eliciting a response, I’ve heard all sorts of gender-fueled insults, I’ve struggled with my body image because of what society has told me I needed to look like, I’ve had someone run up to me late at night and try to steal my purse in the middle of a public street because I was walking alone. Hell, at the age of 8 years old I even had crazy neighbors accuse my family of bad parenting (even got the cops involved) all because of my gender. And if I have one more guy try to hit on me by first asking whether or not I have a boyfriend or a husband, as if I was someone’s property and therefore incapable of denying advances on my own accord, I’ll honestly lose it. To this day, I’m 100% positive that all of this happened because I am, after all, a girl. Was it annoying? Of course. But was it life-altering? No. None of it was that bad. Individually, everything I’ve dealt with was pretty insignificant.

But I want you to think about everything I just told you again. The logic that I just used to explain to you my experiences as a woman is riddled with all kinds of apologist bullshit that we as women have become conditioned to use, because the cards have not been stacked in our favor. As women, we grow up learning that it’s a man’s way or the highway. Because being a woman is hard, and we all know it is. But if we were to tell anyone how hard it actually was, we’d be met with deaf ears. We’ve learned to brush the little things we deal with every single day under the rug. It’s just another cat-call, we think. It’s not that bad.

But it is, and we shouldn’t have to stand for it.

I’ll admit once again–because, by comparison, the actuality of this isn’t lost on me–I’ve been lucky enough as a woman to have a pretty fortunate life. But I’m starting to learn, too, that I shouldn’t have to stand for the “insignificant things” I’ve spent my life brushing under the rug. I’m realizing that I have a voice, and I am lucky enough to be able to use it. And that there are so many little actions we can all take to help make these “insignificant things” a thing of the past. I’m beginning to realize that yes, today’s significance matters to me, because I am a woman, and I have a low tolerance for bullshit, and I am worth every single ounce of value and significance as the man standing next to me. If you’re reading this as a woman, today is about celebrating you and educating the world on how to carve out a better place for you in it. If you’re reading this as a man, today is about celebrating those of you who are strong enough to be part of this movement, and those of you who are willing to listen and support.

Support doesn’t always have to manifest in big, bold ways. It doesn’t have to always take the form of large orchestrated marches, or protests, or signs. I’m learning that the small, everyday things matter just as much, and that if I want to see change, I need to start by being a part of it in my day-to-day life. You can, too. 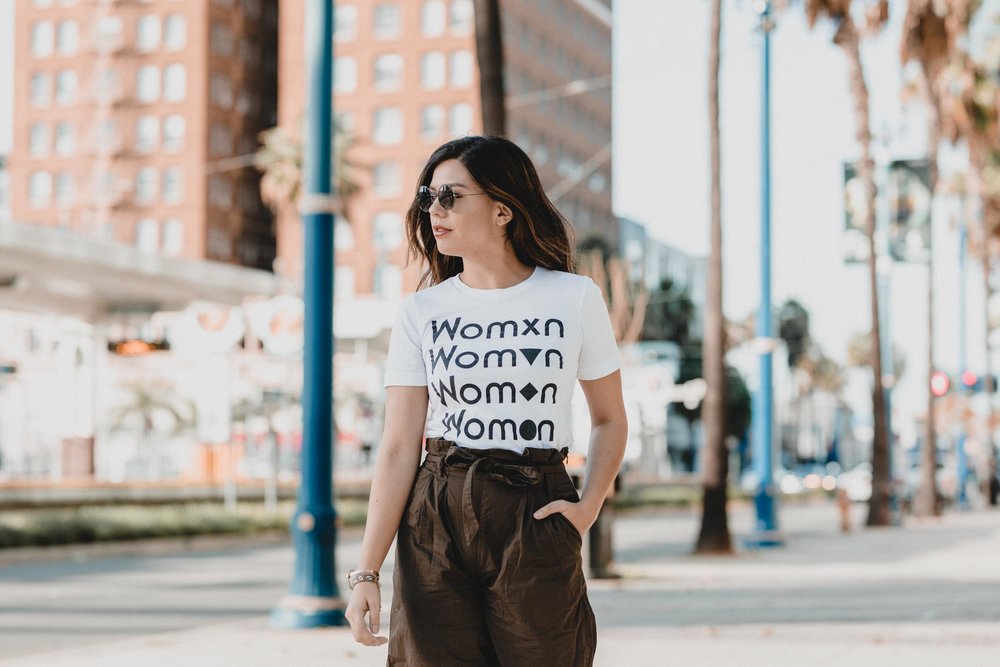 5 Simple Ways to Help Empower the Women in Our Lives:

Back in the day, when a woman was in the workplace (especially in a position of power), it was kinda like being a unicorn. You were the exception, not the rule, and if another woman was hired at the company, your guard would immediately go up. Is she going to replace me? Are people going to like her better because she’s younger/prettier/says “yes” more often? There isn’t room for the both of us!

Flash-forward to today. The beauty of progress is that today, women are no longer the unicorns in the office. In fact, almost half (47%) of US jobs today are held by women. There’s room for her, and her, and me, and you. When we change from a “me vs. her” to a “let’s grow and accomplish things together” mentality, then we’ll really start to be able to do just that.

Historically, women have had to fight twice as hard to be recognized for the same skills or credentials as men. Women have always been in competition with themselves and with each other to make sure they come out on top, and part of this stems from men treating women like unicorns. Including male and female peers in conversation equally–whether it’s about salaries or promotion opportunities or even just about asking what everyone might think about an opinion or idea that’s on your mind–can absolutely help perpetuate a new norm that allows all women to feel like there are enough seats for everyone at the table.

Going off of #1, embrace collaboration with other like-minded women instead of competition. This isn’t Mean Girls. But I get it. As women, it’s become almost second nature to us to fight over men, attention, jobs, you name it. It’s become normal to fall into a comparison game. “She has perfect skin and teeth and her laugh is cuter so it’s no wonder people like her better.” That mentality is so toxic, but I’ve been guilty of the comparison complex for almost my entire life. I’ve shamed myself countless times for not being as tall, as skinny, or as well-spoken.

But when we rewire our brains to lift other women up, the funny thing is, we begin to lift ourselves up, too. The community of women in this world is fierce, beautiful, and talented, and I’m learning that it doesn’t have to be me (or you) against the world. We can, and should, have each other’s backs.

Honestly, I think men have a huge influence on the competitive nature of women. Women feel so much pressure to come out on top in men’s eyes, whether it’s for the purposes of getting a promotion, or finding a potential partner, or even just being seen as “the best” or (my personal favorite) “different from most girls.” Recognizing that preconceived notions like this are actually insults in disguise might help us stop feeling like we always need to be on the offensive.

I would be lying if I told you that, at my first job out of college, the person who leaned over on my desk, smiled and said “at least you’re pretty” when I asked a–what I assumed at the time was not dumb–question, was a man. No, it was a woman, telling me that “at least I was pretty,” so I could get away with asking silly questions.

I’d also be lying if I told you that, at every single job I’ve held to date, I didn’t have people making assumptions about “romantic intentions” when I befriended coworkers of the opposite sex. Do you think these same people were making the same ill-informed comments about the guys I happened to be friends with? Nope. Just me.

I know none of these people meant anything maliciously, but do you see how little things like this help perpetuate this myth of inequality? For better or worse, the repetition of words makes things true. It’s fine time that everyone stop spreading this she-blaming, she-doubting mentality, even if it’s only through a “harmless” comment or assumption.

Of course, one of the best things anyone can do to understand is to get educated. Reading books (and listening to podcasts) by women is one of the easiest ways to understand, and through understanding, to help make a difference.

Currently, I’m reading (and recommend) Lean In by Sheryl Sandberg and Extreme You by Sarah Robb O’Hagan. I’ve also loved Sophia Amoruso’s Girl Boss. Most recently, I’ve also heard great things from Krystal Bick of This Time Tomorrow about Men Explaining Things to Me, which is, as of this morning, in my Amazon check-out cart.

No matter who you are, the most powerful thing you can do is listen. I mean, really listen. And, if you want to take it one step further, you can take what you’ve learned, use your voice, and help to spread the word to even more people who are willing to listen.

The walls that divide us are built by deaf ears and cold shoulders. I absolutely believe that if we just open up to each other more and really try to understand what other people are going through, we’d spend more time building bridges, and less time building walls.